In the preview video for her new collaboration with the Natural Diamond Council, actor Ana de Armas can be seen running along a beach at sunset, enjoying a lavish outdoor meal in the sun, and gazing wistfully out to sea, all while wearing some of the finest jewelry known to man. It is, to put it frankly, a vision of the ultimate movie star idyll; how we all picture the other half spending their summers. Like most of us right now, though, de Armas’s current setup is a little more prosaic—and certainly not where she was expecting to be at this point in the year. When we connect over Zoom to talk about this new partnership, de Armas is wearing a cozy blue angora sweater, her backdrop a room in a rented house in Ireland, where she is quarantining while her partner Ben Affleck films Ridley Scott’s upcoming medieval epic The Last Duel.

For de Armas, the opportunity to dress up in the world’s most beautiful clothing and jewelry would usually be another day at the office, but right now, it’s something she keenly misses. “Obviously a big part of my job is to show up at festivals or movie premieres and photoshoots, and those moments when you get to wear all these beautiful dresses is a lot of fun,” de Armas says. “But I think you also have to enjoy the fact that it’s a little bit of a rest. Sometimes you spend the whole year just going from one place to the other and then you miss your flip flops and sweatpants.” It’s certainly true for de Armas, who has spent the past few years rising through the Hollywood ranks to become one of the film industry’s biggest young talents. The actor has four leading roles in major films this year alone; not to mention her brilliantly understated, Golden Globe-nominated lead performance as nurse Marta in last year’s box office smash Knives Out. “I’m not the most patient person, so taking a break like this is new to me,” she adds. 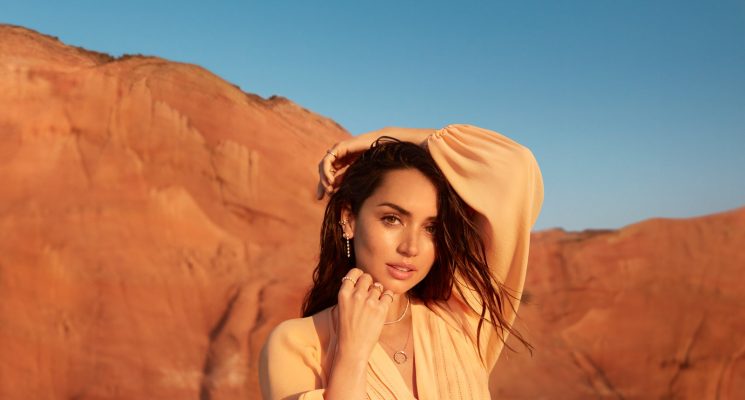 Her next performance, however, as CIA agent Paloma in Bond film No Time To Die, looks set to be her most high-profile yet. And with the high-octane glamour of the trailers released thus far, it appears de Armas’s character couldn’t be further from the cozy cardigans and duffel coats of her breakout performance in Knives Out. “Of course in Bond films, glamour is essential,” she says. “But I don’t really want to define Paloma just by what she’s wearing, as a girl in the gown and high heels. It’s just one part of who she is.” Like all Bond films, details are being kept firmly under lock and key, but the film’s trailers have shown de Armas swanning through a seedy Santiago bar, before whipping out a pair of machine guns and seeing off a swarm of bad guys with all the nonchalance of a classic Bond star.

“She’s a CIA agent from Cuba, and she’s wearing this dress and these diamonds because she’s on a mission and she needs to blend in, so everything is there for a reason,” she continues, before adding, with a laugh: “Trust me, I didn’t want to be in London in the cold wearing that dress and high heels!” Still, de Armas is keen to emphasize how central her collaborations with costume designers are to building the characters she so viscerally inhabits. “I think the construction of the wardrobe is one of my favorite parts of the process,” she notes. “Just like any person, a character tells you a lot of their story and really gives you a lot of information depending on what they wear. I mean, it might not always be to your personal taste, but you just have to give yourself over to it and do what’s best for the character.”

While diamonds serve as a central part of Paloma’s mysterious allure, through her partnership with the Natural Diamond Council, de Armas is hoping to bring something a little more 21st-century to the glamorous decadence of your typical Bond girl’s wardrobe. It’s when talking about the work of the council to make the diamond industry more transparent and ethically responsible that de Armas becomes most animated. “It makes you feel good when you buy a diamond, because you’re not only celebrating a special moment, but you know that that diamond was obtained in a way that respected the workers’ lives and working conditions,” she says. “It felt right to be working with a company whose values I respect and believe in.”

She explains these priorities as something that have felt obvious to her at every stage of both her life and career. “I think the values and priorities and beliefs of my generations have shifted in a way,” she says. “I don’t think I’m unique in believing strongly in sustainability and human rights and equality and giving back to communities, and making sure people are not being exploited by multinational companies and all of that.” Still, it’s with a platform like hers that companies can be encouraged to move in the right direction, something de Armas is fully aware of.

Yet, whether it’s using jewelry as an essential storytelling element to bring her character to life, or to add a little sparkle to a red carpet outfit, for de Armas the universal appeal is simply explained. “When the Natural Diamond Council approached me with the campaign, their focus wasn’t just on the glamour and the beauty of the diamonds, but also what a diamond represents,” she says. “It’s not just a physical thing. It’s about the connections and the memories and the relationships formed through them.” For de Armas—just as someone from a famous film franchise once said—diamonds are forever.