Apple: Back In The Game - Kingteeshop Skip to content

Apple: Back In The Game

One of the biggest risks facing Apple (AAPL) shareholders in the next year was the lack of a 5G phone on the market by the end of 2020. The tech giant was already facing weak iPhone sales trends and didn’t need another reason for consumers to hold onto existing smartphones for another year. The company is now set up for a rebound started with the FQ2 beat as the market became far too bearish on iPhone demand based on weak data points from the December quarter due mainly to China and the trade war.

A big key to the Apple investment story is stabilizing iPhone sales so that Services and Wearables can do the heavy lifting going forward. After all, Apple saw record sales in Services, Mac and Wearables revenues during the holiday quarter.
Apple has recently stabilized around 215 million iPhone units sold per year. The company saw peak iPhone sales all the way back in 2015. 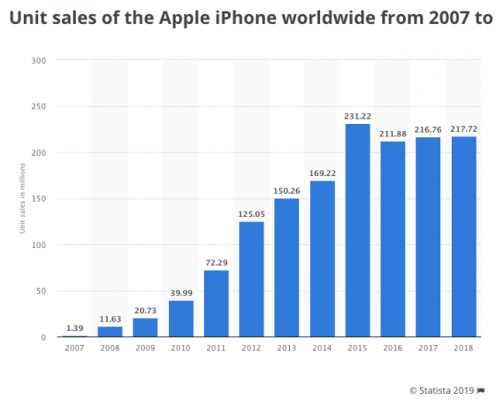 Some analysts such as Ming-Chi Kuo from KGI Securities has Apple failing to reach 200 million annual iPhone sales in 2019. The analyst is more positive about 2020 due to the settlement with Qualcomm (QCOM) that gets the 5G iPhone on the market by 2020.