Are you middle class? This calculator by Pew Research Center aims to tell you

Americans can calculate if they are lower, middle or upper class by using Pew Research Center’s updated calculator.

The interactive asks for state, metropolitan area, household income before taxes and number of people within a household to determine people’s “income tier.” Pew uses government data as recent as 2016 to calculate results.

A couple with a household income of $100,000 in New York is considered middle class whereas the same couple making the same amount in El Paso, Texas is considered in the upper income tier.

Users can also compare themselves to other Americans by selecting level of education, age, race/ethnicity and martial status. 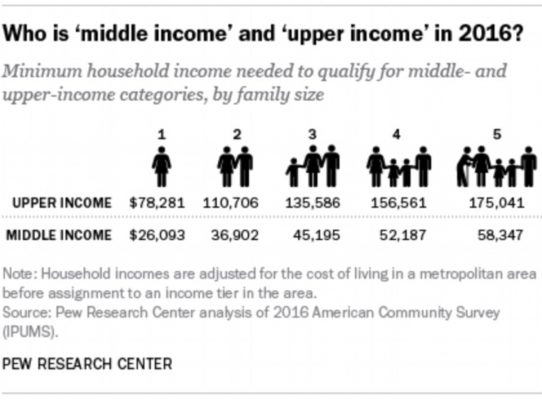 Pew’s calculator was released the same day the nonpartisan fact tank published an analysis suggesting middle class households are falling farther behind the wealthy. The analysis of government data found that roughly half (52 percent) of American adults lived in middle-class households in 2016. Based on Pew’s previous studies, the size of America’s middle class has been shrinking since 1971.