As models Gigi and Bella Hadid, Joan Smalls, and more shimmied through the crowd in the brand’s glam evening looks, guests sipped on cocktails and nibbled on Lauren’s legendary Polo Bar–style bar snacks; it was, as Blanchett later told me, “more of an event than a show.” Shortly before the spectacle, however, Vogue snuck in some alone time with Blanchett backstage—a decidedly less-enchanting setting. “I’ve been told there’s some wet paint, and we have to move the chairs away so we don’t get doused in paint,” she said with a laugh, proceeding to dust off seats for us to sit on. “The glamour of it all. I love backstage.”

The actress was fresh off the plane from Toronto, where she has been filming the upcoming drama miniseries Mrs. America. “I’ve been there for a few months, and my kids were there for the summer,” she said. While the busy filming schedule means she won’t be doing any other Fashion Week events—“I’m in Toronto filming, and I’m barely seeing anything from the [Toronto film] festival, which is also very frustrating”—the actress was indeed ready to let loose yesterday evening and take in the vibrant energy at Ralph’s. “I want Ralph’s Club to be a permanent fixture. It’s such a cool idea,” she said. “[Lauren] is such an American establishment, but he’s more than that; he’s gone deep into the DNA of what the American aesthetic is. So to have a Ralph’s Club in New York is kind of perfect.” 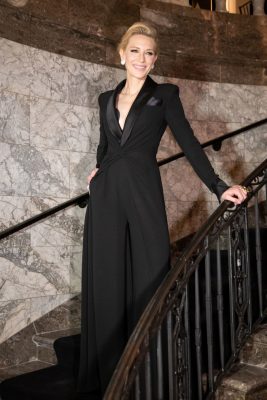 Blanchett added that she admires Lauren’s timeless creations, and his ability to make a retro sensibility feel fresh and new. As a result, she said she has worn many of his pieces on the red carpet over the years: “Ages ago, I can’t remember what film it was, he did a very silvery collection,” Blanchett said. “It had a ’20s feel, but with his twist. And I love that about him: He’s always reinventing iconic silhouettes from the ’20s, ’30s, and ’40s that have been really relevant in American cultural history—but then he puts his own twist on it.”

That remixed-classic aesthetic is true of Blanchett’s own style as well. Having just wrapped a promo tour for her latest film, Where’d You Go, Bernadette, the actress recently served up inspired takes on suiting, such as a suit by Alexander McQueen with sleeves reminiscent of a blossoming rose, among other winning ensembles. While she described her approach to dressing for the step and repeat as “ad hoc,” Blanchett has undeniably crafted a signature look in Hollywood—one that is always tailored and sophisticated, but never risk-averse. Her key to constantly evolving and feeling inspired? Simply having fun with fashion.

“I don’t think about it too much,” she insisted. “I’m a bit of bowerbird. My taste is quite eclectic. The more I mature, and the more that I’ve been exposed to extraordinary people designing extraordinary things—not just in the world of fashion but in architecture, theatre design, and film costumes—you [end up] like a rolling stone; you accrue a sense of what’s possible. And also, I don’t really care what people think in the end. I’m not dressing for anyone’s approval.”

Blanchett is also a transformative actress, and the roles she takes are often heavily rooted in costume design—something she said continuously alters her approach to dressing in real life as well. Whether she’s portraying Queen Elizabeth I (Elizabeth) or a Chanel-clad Upper East Sider (Blue Jasmine), the actress is constantly shape-shifting, and aspects of her characters will sometimes manifest themselves through her fashion choices, both on and off the red carpet. “The gift of playing a role, whether it’s in theater or film, is it influences the way you look at the world for three to five months,” she said. “That’s part of the privilege and pleasure of it.” 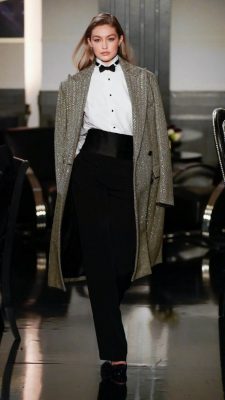