Last night the Evening Standard celebrated its 65th annual theater awards at the London Coliseum. After comedienne Phoebe Waller-Bridge, a new Master of Ceremonies take to the stage this year: the mesmerizing actress Cush Jumbo. 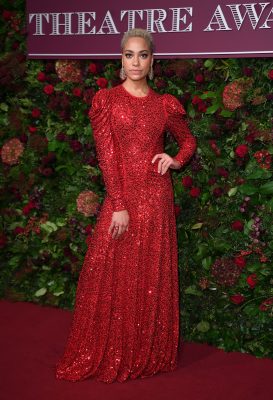 To reflect London’s thriving theater scene, Jumbo made sure to bring an extra dose of drama to her wardrobe with an impressive six outfit changes. “We don’t want the audience to get bored,” quipped the actress. Preparations and fittings began in early October, when Jumbo flew into London for 48 hours to collect her OBE from the Queen dressed in a Michael Kors check skirt suit. Naturally, the American brand was her first choice for the awards show; she took to the red carpet in a fluid scarlet sequin gown from the Kors’s Resort 2020 collection. With its draped, ’40s-style sleeves and slinky ’70s-inspired silhouette, the dress was glamorous to begin with. Set with multiple brilliant-cut diamonds, the Fernando Jorge “Disco” earrings she wore took the ensemble to a glittering new level. A final sprinkle of stardust was added with a Jimmy Choo clutch that was decorated with a sunburst of crystals. (Fun fact: The contents of her evening purse told an entirely different story however: all Jumbo carried was Olbas Oil pastilles.) 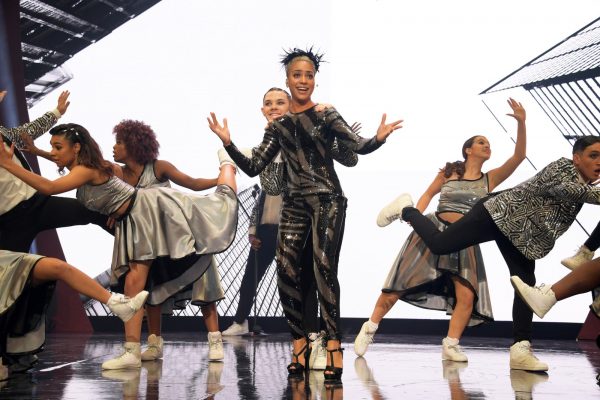 For the night’s opening number, a surprise performance, Jumbo danced with 10 pupils from her alma mater, the BRIT School of Performing Arts & Technology. She had planned to kick off the night with a “Beyoncé-style reveal,” rushing through the theater “as if late from Heathrow” before proceeding to change out of her plane outfit mid-routine to unveil a zebra sequin bodysuit by David Koma. The suit was neatly concealed under a Nike tracksuit, made with magnetic poppers for a speedy change. Originally the actress was to wear a David Koma Spring 2020 runway look, but one week before the awards the real Beyoncé had asked for the same piece. Quelle horreur! Thankfully, Koma was able to make a new bespoke bodysuit just for her in a silver zebra print to match the BRIT students’ self-made costumes. Jumbo commanded the stage in her feather-trimmed platform shoes, and the students crowned her with a Noel Stewart feather headpiece. As they say in theater: all’s well that ends well. 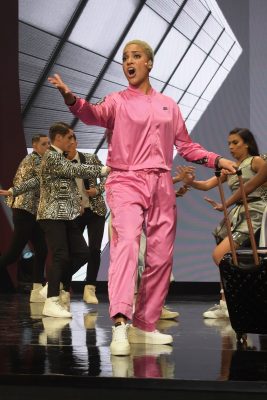 With the catsuit off, Jumbo slipped into a floral Giambattista Valli couture gown: a whimsical concoction created with meters of tulle underskirt and specifically altered for Jumbo after a fitting to Paris. (The designer and actress have a special relationship after Valli created her stage look for Josephine and I, the one-woman show written by the actress based on the life of Josephine Baker that debuted at Joe’s Pub in New York back in 2015.)

While Jumbo currently lives in New York, she’s a born and bred Londoner. Hence why hosting the awards felt like a true homecoming, something she wanted to celebrate by wearing several British designers. The first red carpet look she ever wore in New York was by Christopher Kane. As an avid theater fan himself, Kane agreed to make her a dress for the evening, too. For this occasion, Kane adapted a chainmail and blue feather minidress from his Spring 2020 show. “It feels really me, and it’s so fun,” said Jumbo.

Even in the dimly-lit dressing area, nothing could diminish the sparkle of Jumbo’s stage look for the grand finale: an electrifying Erdem shift dress covered in feathers and sequins from the designer’s Fall 2020 collection. The tinsel-like shimmer of opulent red and pink embellishments were amplified by a Jessica McCormack hexagonal ring set with 2.70 carats of step-cut rubies.

After Jumbo bid adieu to her audience, she dashed through the labyrinthine passages backstage at the Coliseum to the main dressing rooms one last time, slipping into a form-fitting Alexander McQueen gown with a crystal knot belt. The squared-off, superhero-style shoulders were the perfect finish for Jumbo’s night of superhuman stamina—and fabulous style.