Just a few days ago, Dua Lipa attended the 2019 Mnet Asian Music Awards in Nagoya, Japan in what can only be described as the ultimate Barbie doll frock: the skintight, super-short minidress could not have been more sparkly, especially when paired with matching pink glitter heels (just as Barbie would). Thankfully, Lipa seemed delightfully self-aware about it all, proclaiming herself a “girly girl” in her Instagram caption.

Now, though, the singer has already turned to the exact inverse of that vibrant pink number. Posing in her hotel room, she posted a snap on Instagram wearing a futuristic, white Marine Serre bodysuit (if you squint, you can make out Serre’s signature half-moons on the matching leggings). It’s not the first time Lipa’s worn the avant-garde French brand—she sported one of Serre’s scarf dresses with flesh-toned leggings for a performance in Taipei last year—but it’s certainly one of her most starkly minimal looks thus far. Lipa herself acknowledged the outfit sits outside of her usual wardrobe, accompanying the photo with the caption: “I come in peace,” which she punctuated by the little alien head emoji. Is Lipa feeling a bit out of place on earth, or is she gunning for a role as Milla Jovovich’s character in a remake of The Fifth Element? No matter the answer, one thing is certain—it’s hard to imagine anyone else pulling off such a striking garment like Dua Lipa can. 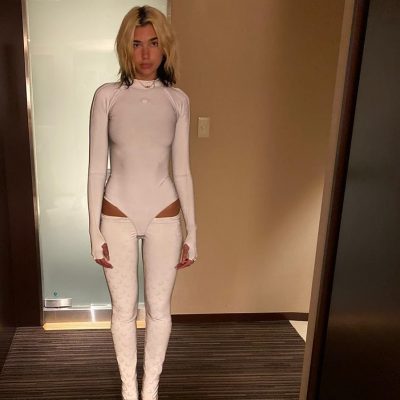