Last week, Emily Ratajkowski released a miniskirt suit from her label Inamorata; within two hours, the look had nearly sold out. (She’s already announced on her Instagram that she is currently working to restock more.) The viral set includes the Los Feliz blazer, an oversized jacket that reaches a tad below than the hem of the matching high-waisted Vista skirt. There are four colors: burnt orange, camel, black, and baby blue (the latter was the first to sell out). Ratajkowski modeled the drop herself on her Instagram with typically bold styling, going sans bra and sans shirt. It’s all very Ally McBeal—if Ally McBeal was a little less uptight.

Ratajkowski created the Instagramable, saucy set after not being able to find a skirt suit that she liked. “I love suits, I love bathing suits, and I also got married in a suit,” she says. “I’ve actually been wearing tons of blazers this fall. I couldn’t find the exact suit I wanted, which was this miniskirt moment with an oversized blazer, as if it was a twist on a classic. It makes getting dressed easy. Our motto is ‘Look chic, be hot,’ so this is an easy, natural extension of it.” Of course, she isn’t the first to push the miniskirt set: On Ratajkowski’s mood board were a series of classic images, from the supermodel-beloved tweed miniskirt sets in Easter egg hues from the Chanel spring 1996 collection to Cher Horowitz’s sassy foot-long skirts and blazers from Clueless.

While Ratajkowski has appeared on her Instagram wearing the full set, she’s also a fan of mixing and matching the pieces. Most recently on Instagram, she posed with her husband Sebastian Bear-McClard wearing the black incarnation with a blue Online Ceramics hoodie. “They were designed as a set, but I’ve also been loving breaking them up and wearing them with chunky sweaters and tights and big jeans,” she says; to the office, Ratajkowski wears them with a pair of sneakers. 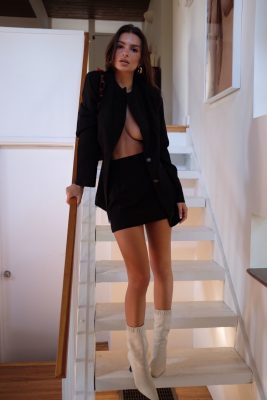 While the skirt probably doesn’t follow the standard “fingertip rule”—the classic dictum that calls for the hem of a skirt to reach at least three inches below the fingers—Ratajkowski doesn’t believe in adhering to stuffy dress-code rules. The miniskirt fits into the model-actor’s philosophy of wearing what one wants, when one wants. “My friend was saying to me that wearing what you want to wear is a test. If someone doesn’t take you seriously, that isn’t a person you want to work with anyway,” says Ratajkowski. “For me, because it is such a micro mini, there is something a little ‘fuck you’ about it. We have all been in situations, like, ‘Is this appropriate to wear?’ I like the idea of wearing the type of suit that I want to wear without having to worry about whether it is offensive to anyone.” Spoken like a true businesswoman. 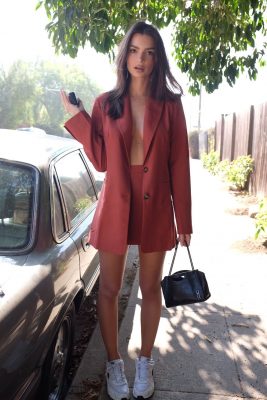