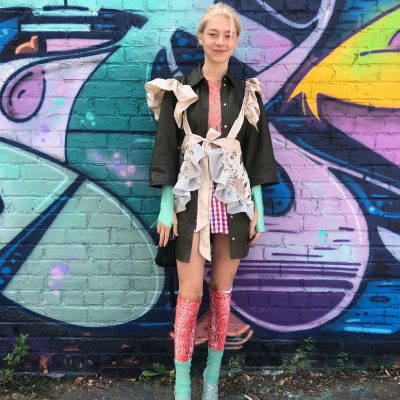 It’s hard to stand out at a Lou Dallas show, given the number of kookily dressed cool kids on the scene. Today, at the label’s show in Brooklyn, the crowd was particularly well turned out, bedecked in their dreamiest DIY tulle looks and coated in glitter. Nonetheless, one show-goer managed to shine the brightest: Hunter Schafer, the actress who plays Jules in the cult HBO show Euphoria. The 20-year-old, whose glowing skin is like something out of a Neutrogena commercial, was wearing an artfully layered ensemble, not unlike something her character Jules would wear: think, a dainty frilled apron, a slick black leather coat, and a short checkered skirt. Of course, she threw in some funky Lou Dallas garb into the mix, including the label’s trippy pink reptile print tights pulled up to her knees.

Diehard fans of Euphoria⁠—and there are plenty, given the numerous Instagram fan accounts that have popped up dissecting the show’s wardrobe⁠—might recognize Schafer’s stretchy acid blue Lou Dallas top, too. According to the actress, the piece was a version of “a clubby shirt that Jules wore in Euphoria.” (Her character sported the Fall 2019 item in Episode 7 during an intense strobe-lit club scene.) The actress has been a longtime fan of Lou Dallas, and actually suggested the label to the show’s costume designer, Heidi Bivens. “I’ve been following Lou Dallas for awhile,” said Schafer perched on a front row couch, “I sent Heidi her instagram and we both freaked out about it.”

Lou Dallas by Raffaella Hanley isn’t the only emerging fashion label to make a cameo on the show. It has also brought the likes of buzzy labels such as Eckhaus Lotta, Peels, and yes, Lou Dallas to the masses. “Right now in street style and fashion there is a real resurgence of creativity and in homemade, repurposed vintage, just like what Raffaella is doing,” says Bivens. This sort of let-it-loose fashion philosophy epitomized by Jules on the show has trickled into Schafer’s personal style. “It definitely reconnected me to something that I haven’t felt since highschool with going a little harder with how I style myself,” she says. “Then it also gave me a, ‘Fuck all this! I’m not gonna care what I wear.’” And if Schafer looks particularly ethereal in Lou Dallas, it’s because she’s fully embracing the otherworldly mood. “You can feel the magic sewn in the clothes,” she says. “It is made with love and magic.” Now what could look better than that? 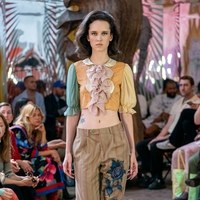