Last night, the perpetually luminous guru of high-brow health Gwyneth Paltrow attended the opening of the 1 Hotel West Hollywood Grand in a sharp black suit from her very own G. Label, artfully accessorizing the ensemble with a handful of layered gold necklaces and a simple pair of strappy sandals. While the look itself was polished and pared-back, it also had a hint of edge: Paltrow made the canny decision to go braless, fully embracing the diving décolletage of her self-designed suit jacket.

Gwyneth die-hards will also notice that her sleek get-up is reminiscent of the beloved styles she wore throughout the ’90s, and continue to populate Instagram feeds to this day. After all, who hasn’t stumbled across a yesteryear Paltrow on the red carpet appearing angelic in a sleeveless black turtleneck, sans bra? Her black suit is something that wouldn’t be out of place in some of the actress’s most fashion-forward films; whether the wardrobe of her uptown, UN-employed character in A Perfect Murder, or the uber-minimalist garb she sported in the classic romcom Sliding Doors.

This isn’t the first moment that Paltrow has channeled her own ’90s style, either. Two years ago, in a casual Instagram post, she wore an all-green outfit that directly recalled the famed Donna Karan blouse and slip skirt combo she wore as Estella in Alfonso Cuarón’s 1998 adaption of Great Expectations. This time, however, Paltrow’s look didn’t need any pops of color to turn heads—her sexy take on classic suiting more than stood out on its own. 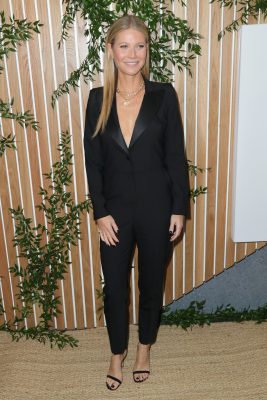