When we first see Emily Dickinson in writer, creator, and co-executive producer Alena Smith’s new show, she isn’t yet the reclusive legend she would later become. As inhabited by fellow executive producer Hailee Steinfeld, she’s in her 20s, with only the first sparks of her poetic genius flaring out of her fingertips. But she is wearing a version of the legendary white dress that would come to stand as a symbol for her eccentricities—this one a cotton lawn gown, pin-tucked and hand-pleated.

That’s pretty much the only conventional thing about America’s most famous female poet in Dickinson, a thoroughly psychedelic take on her coming-of-age story—one of the first shows out the gate for the new streaming service Apple TV+. Smith—a playwright and former writer on The Affair and The Newsroom—calls it “a modern American gothic story,” and by modern she means entirely remixed out of any fusty, puritanical expectations into a period piece that only tangentially honors its period: We see Steinfeld’s angsty, rambunctious, queer Dickinson passionately kissing her best friend, Sue (Ella Hunt); telling a suitor that she’s “in love with Death”; and exclaiming, “This is such bullshit” when told to fetch some water as part of her chores. (Also starring are Jane Krakowski as Emily’s persnickety mother and Anna Baryshnikov as uptight sister Lavinia Dickinson.)

“Emily’s inner consciousness doesn’t fit in its own time,” says Smith, “and it’s bursting out.” Cue the untamed paisleys and lush silks that swaddle her body, alternately confining her and providing a tableau as exuberant as the poet herself.

If the white dress is a hat tip to Dickinson obsessives, much of the rest of the costuming is a conscious implosion of expectations. John Dunn, the Emmy-nominated costume designer known for aesthetically immersive shows like Vinyl and Boardwalk Empire, says that in designing Dickinson’s deeply researched, hand-sewn wardrobe he wanted to quash the “warped idea of what this period looked like . . . all those sepia tones and dark, gloomy colors.” Instead, with the Civil War still a decade away, the era was decidedly upbeat: Palettes were vibrant, and patterns layered like patchwork quilts. In concert with the set’s rich, jewel-toned walls, hand-painted French wallpaper, and plush, tufted couches, the gowns—and even the men’s attire—swirl into an explosive aria. 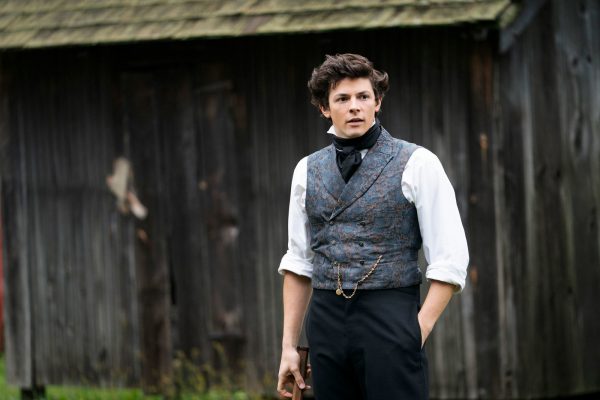 “I wanted to show Emily as she was exploring the world, trying new colors and different silhouettes on herself, testing the limits of the world she inhabited,” says Dunn. The clothes as a whole are a mix of exacting and adventurous—keen to honor the strictures of the day, but daring in their understanding of how a poet’s attire can mimic the wheeling nature of her mind.

The series flips our ideas of period television inside out, pairing a modern vernacular with a soundtrack that features A$AP Rocky, Billie Eilish, and Ecca Vandal’s uncanny “Future Heroine.” It’s a smart homage to Dickinson herself, whose clipped lines and slant rhymes, scribbled on envelope backs and receipts, packed the sort of linguistic punches that quietly—secretly, really—reinvented the idea of what poetry might be. Now—inside the relatively small box of a 30-minute bildungsroman-cum-comedy—Smith and Dunn have turned the poet into a pinwheel of riotous flair.

Steinfeld, who made her big-screen debut in 19th-century clothing, laughs when she points out that the attire in Dickinson is much less dusty than True Grit’s earthy woolen coats. The poet’s wardrobe, in fact, offers up no small dose of glamour: Dickinson appears tattooed and corseted in chartreuse silk for a circus segment, and with crimson hands and a regal gown to play none other than Lady Macbeth in a homemade production.

But, most strikingly, in a midnight scene, Dickinson floats out of her house and toward Death’s carriage in a scarlet silk charmeuse gown, her lips so violently stained that they too appear bloody. “Who in their right mind would ever think that Emily would be in this gorgeous and extremely sexy red dress?” Dunn asks with a laugh. For Steinfeld, the dress was a tease throughout production: She’d see sketches and swatches but was still dazzled by the final reveal. It’s fitted and sumptuous, equal parts a presentation of the poet’s nubile self and her fiery mind. “I would visibly see my waist go down in size as I looked in the mirror while I got dressed every morning,” Steinfeld says, drawing a line between the dress and Dickinson’s poetry. “The constraint—and the discomfort—look so elegant and effortless.” 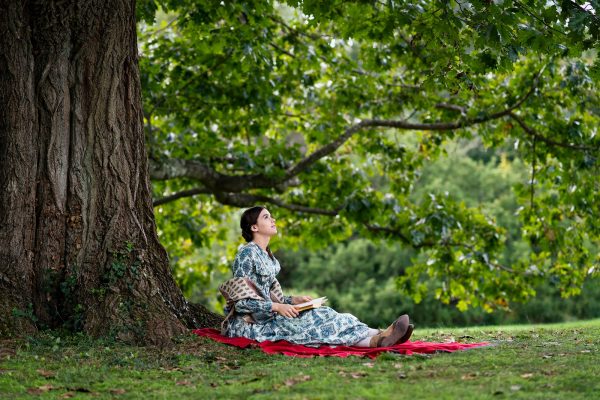 This is an Emily Dickinson we’ve never glimpsed in black-and-white photos or oil portraits. Forget the demure white dress that still stands on its mannequin in her bedroom—what the modern world wants is a Dickinson who, as her poetry exclaims, “sweeps with many-colored brooms/ And leaves the shreds behind.”