Where is Jake Gyllenhaal’s tie? Did he lose it last night on the way to the afterparty of Sea Wall, his latest gig on Broadway? Or maybe a rabid fan stole it from him! Also, where is Gyllenhaal’s much-talked about gold chain? Looks like the actor is loosening up his approach to men’s style these days. He stepped out in Manhattan yesterday donning a slate gray double-breasted suit with shiny black dress shoes. Underneath, he wore not a traditional button-up, but rather a simple white T-shirt.

It’s a risqué move in the world of men’s fashion. A buttoned shirt and a tie instantly reads more put together. The combination of T-shirt and blazer, on the other hand, can appear thrown together or, worse still, tragically dated. (To a retro Ron Burgundy and the AXE-loving boys of Jersey Shore, we’re looking at you!) But before you cast this styling trick to one side, consider this: The look has emerged on the runways over the past few seasons in chic and compelling new iterations. For Spring 2020 Men’s, Tom Ford showed a suit layered over a mock neck tee and Junya Watanabe offered up a denim blue, sheeny version suit over a white t-shirt. Givenchy went the bold route with a aquamarine tee underneath a slouchy lavender blue suit. As for Gyllenhaal? A hunk like him doesn’t need much extra to stand out. No tie necessary here. 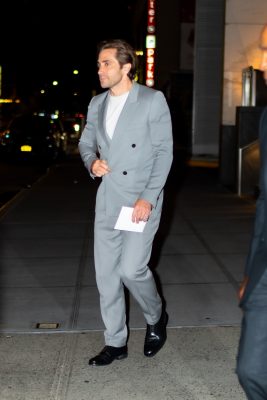