My style is impeccable

Last night, Justin Bieber boldly declared on Instagram: “my style is impeccable.” The entertainer (and, more recently, designer of the label Drew House) announced this statement with a gallery of three images wearing the same outfit throughout. Leaning against a silver sports car, Bieber sported a black $48 dollar Noah baseball cap, an oversized blue and grey striped button-up that skimmed his upper thigh, and a pair of very relaxed drawstring pants that shimmied far below his hips, causing the hem to scrunch around his white Air Force 1 Off-White sneakers. Unlike previous fashion moments, Bieber went sans undershirt, showing off his tattooed torso, while also making sure that his white Calvin Klein briefs were on full display

@drewhouse it’s so lit it’s not even funny

Bieber has certainly been feeling his style lately, often leaning into the baggy silhouettes of the noughties. In early August, he stepped out in a large shirt printed with blotted florals, teamed with a ribbed white tank and a pair of corduroy pants so loose they looked as if they would fall off of his body. Back in a July Instagram post, he styled himself as a long lost Backstreet Boy member in a body-engulfing lavender shirt and pant set by Drew House, noting in the caption that “@drewhouse it’s so lit it’s not even funny.” 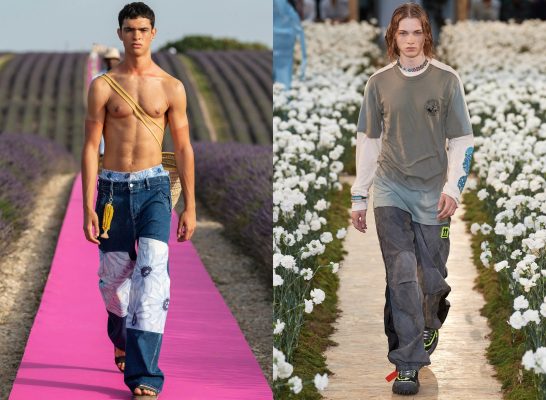 There are, of course, plenty of people who may think Bieber’s refined slacker style is anything but “impeccable,” but he’s actually very on-trend. Baggy pants, drop crotches and plumber crack-revealing fits have been making cameos at menswear shows like Jacquemus and Off-White for a few seasons now. And he must be on to something, given that all of those coolly droopy pieces on his Drew site are currently sold out. Maybe it is time to let Bieber, well, “hang loose.”