In the basement of Maryam Nassir Zadeh’s storefront last night, just a few minutes before her scheduled set time, Kim Gordon tucks her brown speckled MNZ shoes into her bag. “I actually wear these flats of hers every day, but performing is different. I need a little bit of a certain height,” Gordon, who cuts a surprisingly slight figure, says of this last-minute change-up. Gordon had wanted to drop by Zadeh’s showroom earlier in the day to pick up something to wear, but she was too busy rehearsing for a Raymond Pettibon script reading at the Whitney Museum, so she settled on an outfit that felt a bit more animated. “Sometimes on stage I’ll wear shorts because I get energy from my legs, so I thought if I wore these spandex disco jeans maybe it would be the same thing,” Gordon says of the skin-tight metallic blue American Apparel jeans she decided to wear to the event (“You can still get some American Apparel online,” she says). She paired them with a watercolor-inspired printed sheer top from a brand called Allegro—when she looked at the tag to identify the brand, she realized that she’d been wearing the shirt inside out all night.

Gordon performed an improvised set at the store’s 11 year anniversary party, which culminated in the artist holding her guitar high above her head, almost getting entangled in the fronds of a palm tree by the door, before pressing the instrument against the floor-to-ceiling glass windows that look out on Norfolk Street. A crowd of New York City fashion mainstays including Mike Eckhaus, artist Chloe Wise, and Gordon’s daughter Coco Gordon Moore joined those in Gordon’s creative circle, like Gang Gang Dance’s Lizzie Bougatsos, as the artist performed in a makeshift stage in the corner of the room. Earlier in the evening, guests partook in the artful, almost intimidatingly arranged food creations by chef Laila Gohar—potatoes were pierced with wicks and fashioned into candles, while nuts encased in honey had to be cut with small scissors to be sampled and braided challah stretched multiple feet long across display stands. 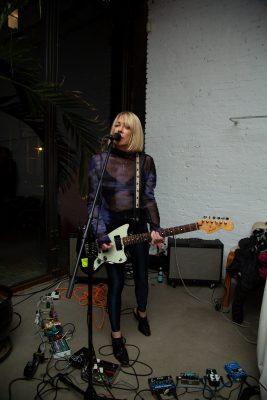 Zadeh had always been a fan of Gordon’s music, but the real link between the two is Gordon’s daughter Coco Gordon Moore. Moore has modeled in Zadeh’s runway shows for the past few years, and Gordon has sat front row to watch the proceedings. “I felt it would be so personal to have her play, and also a unique and epic moment for MNZ to celebrate in a new, unexpected way to mark the next chapter in our creative journey,” Zadeh says of the decision to cap off the event with Gordon’s performance. “I come into her store because of Coco and I’ve been to shows and we have some mutual friends,” Gordon adds. “She’s just lovely, and it’s nice to see that spirit in New York, when everything is so commercial,” Gordon says. “I like how her clothes are femme but can be sexy in an offbeat way, and are just unexpected. Things are unexpected and surprising but not necessarily avant-garde,” Gordon adds, which lends itself well to her overall approach to fashion. “Onstage, I always like to dress against type and wear things that aren’t rock and roll, like a dress. I like things that are unexpected.”

Moore says that she doesn’t relate to the wave of ’90s nostalgia that’s come back into fashion nowadays, but she does admit that her daughter has given a new lease of life to some of her old pieces. Moore used to wear Gordon’s old X-Girl jeans when she was in high school (“She made those nerdy jeans work—suddenly those ill-fitting, nerdy jeans were cool”), but Gordon has also influenced her mom’s style in other ways, beyond introducing her to the world of MNZ. “She reminds me that it’s good to have fun with fashion and simple goes a long way,” Gordon says. “Little details go a long way, too, whether it’s a pair of sunglasses or earrings—you don’t need very much.” As she gets older, these lessons carry more weight. “When you’re young, beautiful, and tall, everything looks good on you,” Gordon says in reference to Moore. “As one gets older, it becomes harder to feel your identity because you also don’t want to dress like a teenager, so it’s difficult.” It might feel like a tricky balance, but Gordon is taking it in her stride. 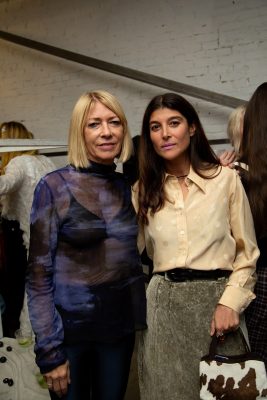