Shia LaBeouf has been on a roll this year. The actor has upgraded his fashion sense to a level that few other Hollywood gents can reach. It’s his grimy, disheveled aesthetic—combined with the season’s sharpest suiting and statement shoes—that makes for an effortlessly cool look that never appears like he’s trying too hard. Take the square toe loafers he wore just a few days ago; if styled wrong, it could have been a ’90s disaster, yet he totally pulled them off with ease. Another tricky piece he’s making the case for this week? Too-short jeans. 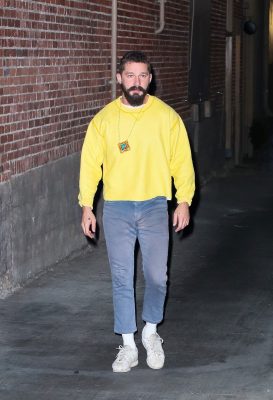 Today, the actor was seen in Los Angeles on his way to a taping of Jimmy Kimmel Live. And while his ensemble was more casual than the slick suits he’s been sporting on the red carpet, it was still a lewk. LaBeouf wore a pair of flood jeans that were cropped well above the ankle. Sometimes this silhouette looks like you left your jeans in the dryer for too long, but the actor made it purposeful, as if all he wanted to show off was his crisp white socks and dirtied low-tops. He wore the pants with a bright yellow crewneck and one wild necklace, which appeared to be a painted portrait inside of an ornate picture frame.