If you’re not following Marc Jacobs’s glorious Instagram page, you’re missing out: it’s a real fashion trip. He posts almost-daily outfit pics, which often include his favorite death-defying heels; he’ll invite plenty of double-taps with adorable photos of he and husband Char Defrancesco’s three dogs; and on lucky days, he’ll even post some throwback snaps offering a glimpse of his style from years past. Today, Jacobs did just the latter when he revisited a style moment from almost four decades ago—and it has a sentimental story attached to it, too. 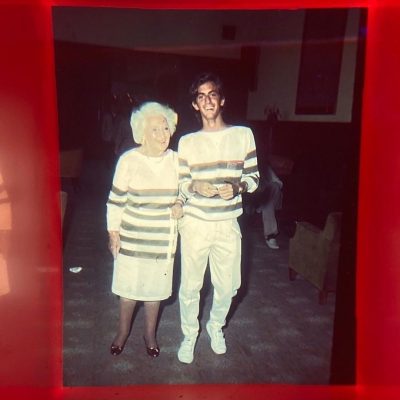 His latest trip down memory lane, a photo taken back in 1980, shows the designer when he was just 17 years old, standing beside his late grandma in matching outfits. At the time, Jacobs was working for Charivari, a now-defunct boutique in New York City, as a stock boy (and later on, as a salesperson). He explained that the gig led to him securing matching looks for him and his grandmother: “I had convinced my grandmother to buy herself this Claude Montana knit dress,” Jacobs wrote of the store, adding that he “saved all my money from work to buy the men’s sweater version of her dress.” The his-and-hers Claude Montana pieces in question were white knits with hefty black stripes overtop.

While they were certainly two peas in a (very chic) pod, Jacobs and his grandma did have two distinctive styling approaches to the pieces. Jacobs wore his sweater with “a pair of white cotton pants by designer France Andrevie and Velcro fastening Adidas,” he wrote, while grandma wore her dress “with low heeled pumps from Bottega Veneta.” (She had good taste, clearly.) They both, however, accessorized with jewelry from Robert Lee Morris’s store Artwear (also now shuttered). The only thing more impressive than the duo’s adorably coordinated looks? That would be Jacobs’s memory itself—I can barely remember what I wore last Tuesday.