MIAMI (CBSMiami) – Time is running out if you plan to vote in the upcoming November Election and have not registered to do so.

Monday, Oct. 5, is the last day to register to vote.

To register to vote, you must:

The easiest way to register to vote is to do it online at RegisterToVoteFlorida.gov.

If you decide to vote by mail this year, you have to be a registered voter and you must request a ballot from your county’s Supervisor of Elections website. Immediate family members or guardians can request a ballot for someone else. A voter’s signature is required and must match the signature on file.

Vote-by-mail ballots must be received by your county Supervisor of Elections by 7 p.m. on Election Day.

Vote-by-Mail ballots can be returned through the mail, dropped off at any Early Voting location during the hours of operation via secure drop box, or dropped off at your county’s Supervisor of Elections office.

The Broward County Supervisor of Elections Office said between Friday and Monday the number of people registering to vote went from 1,200 to 7,300.

“The last big surge was in 2008. People are dropping off their mail-in ballots and registering so they don’t have a problem Election Day,” said Broward Deputy Supervisor of Elections Mary Hall.

Juliette Sechrist registered for the first time at the Lauderhill Elections Office Monday.

“I Knew today was the deadline so it resonates with me. I just moved here from Tennessee, so I thought I had to get a new driver’s license. But I found I just needed my social security number, so it was easier,” the 20-year-old she said.

Voter registration is surging in Miami-Dade as well.

In just the past week, a total of 9,100 additional people were added to the rolls, according to the Miami-Dade Supervisor of Elections Office.

Pamelia Harris just relocated back to South Florida. She registered Monday and said she never misses an election.

“My grandfather used to have to sit outside as others voted. It’s everyone’s duty to vote,” she said. 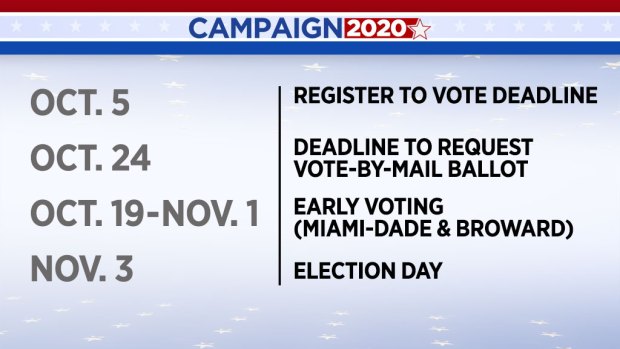 Early in-person voting starts as many as 15 days before Election Day though the number of days and locations vary by county.

MONROE: Early voting runs from Monday, Oct. 19 – Saturday, Oct. 31. There are 5 locations which will be open from 830am – 5pm. All locations will have official ballot drop boxes for vote-by-mail ballots. Click here for a list of early voting locations in Monroe.