A few days ahead of his first ever New York Fashion Week show, Orange Culture’s Adebayo Oke-Lawal walks into the lobby of the Moxy Times Square Hotel. He’s wearing a dangling earring in one lobe, a hoodie, and a cross-body micro-sized Jacquemus bag. His brand consultant and advisor, New York-based Derin Masha, smiles and says, “he’s so extra.” Oke-Lawal, deeply humble and big-hearted by nature, lets out a laugh and adds: “I know.” 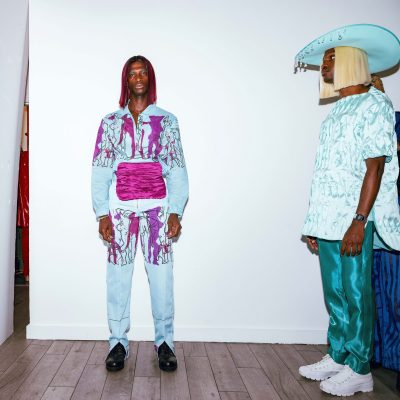 Founded in 2011, the self-taught Lagos-based designer has pushed Orange Culture forward to become one of Nigerian fashion’s biggest names. The charismatic, polychrome spirit of Oke-Lawal’s collections has seen him categorized as a menswear designer, despite championing wardrobe androgyny and a de-codified representation of masculinity. The approach has been an uphill battle, he explains—there were even death threats in the earlier years.

“We had, and still have, some problems. The way society is in Lagos… we’re used to very specific ways of seeing things. Gender is an exact way of thinking back home, and has been for a very long time. Things have been written in the press that say Orange Culture is ‘feminizing our men’ and that we’re going to hell because of it. Now it’s just, like, I don’t care, you can write it. I’ve been doing this for years and it is working, and it is still growing. If you have a problem with a man wearing jewelry or an oversize blouse or painting his nails, that’s your problem. It’s not Orange Culture’s!” 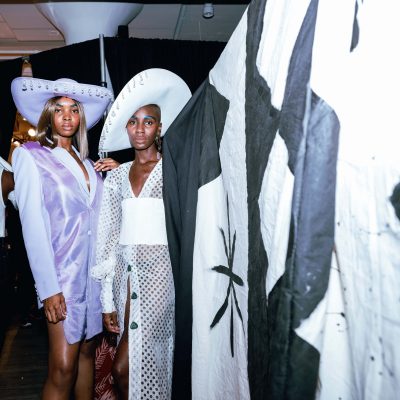 Oke-Lawal’s charisma is visible in his designs, and he attributes a portion of Orange Culture’s success with how genuinely it aligns with his own lifestyle. “I live the life it shows,” he says. “People connect with the truth of it.” Blazers are striped and shimmery, jackets are boldly hued and creatively textured, and trousers are often breezy and bright. Most importantly, perhaps, the clientele is broadening; there are now stockists all over the world, the New York branch of Opening Ceremony soon to be the newest. “People used to say Orange Culture was for the artists or the creatives,” says Oke-Lawal. “But now bankers and lawyers are buying it. Women are buying it. Some moms buy it and compete with each other when picking up their kids at school, like, ‘I’m a bad bitch now.’” He’s not bragging; he’s smiling along, appreciative of the fact that, even though it has been a slow-burn ascent, he’s getting there.

“The brand is raw,” he continues. “It’s not perfect. We don’t have one million machines. We’re building. We still make everything in Nigeria. And we have a story to tell. This is my own Lagos, my own take of what Africa can bring to the table nowadays. And this is coming from someone who has been in the community, and designed based on the community. It is to show what we really are.” 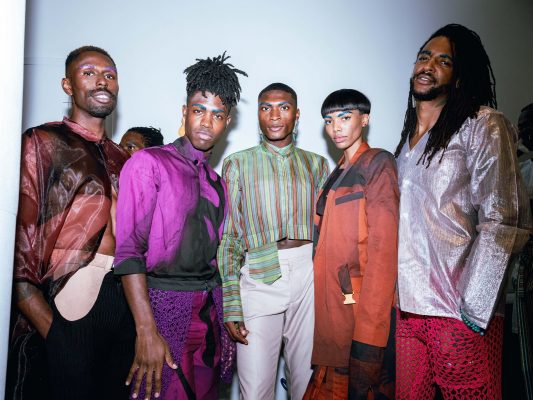 Which brings him to New York. Both Oke-Lawal and Masha mention that Orange Culture has been invited to show in Gotham before, but that they wanted to wait until they felt they were truly ready. Spring 2020 will see a loose theme of a “shadow-man,” says Oke-Lawal. “You know, the demons that we fight amongst ourselves. I chose this because we’re taught to suppress a lot of our issues. You will see an abstract shadow man in the prints. It’s my experience in Nigeria, but anyone who is alive, really, can connect with this conundrum.” True to form, though, the lineup is still rainbow-bright and rich with jewel tones. 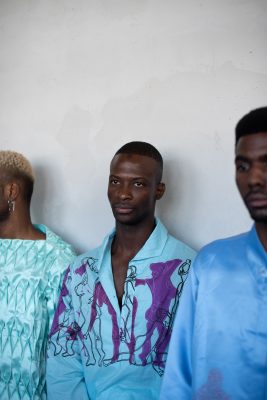 Oke-Lawal concludes that the decision to bring Orange Culture to the United States now was the correct one. He and Masha put out a casting call, and a massive amount of hopefuls—including many Nigerians—showed up. Then, after their fitting photos, they stuck around. They even helped clean up when the session was done. There’s an undeniable magnetism around the man and his brand, and it is steadily drawing in a more global audience—but always with Lagos at its nucleus.

“Things are changing. Nigerians are becoming more self-aware,” says Oke-Lawal. “Our generation is so much more liberated. We just want to be ourselves. I’m here to show this new reality to the world.”