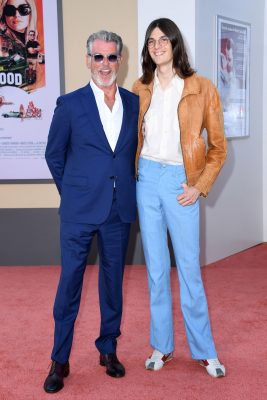 Last night in Los Angeles, celebrities poured into the Chinese Theater for the premiere of Once Upon a Time in Hollywood, the Quentin Tarantino-directed film starring Brad Pitt, Leonardo DiCaprio, and Margot Robbie. In the star-studded crowd was former 007 actor Pierce Brosnan looking every bit the aged-like-fine-wine James Bond with his rugged salt-and-pepper beard. The 66-year-old actor arrived wearing a polished royal blue suit sans tie (it’s summer after all, time to let that man cleavage breathe with a handsome man at his side. The fresh-faced, long-haired stranger was none other than Brosnan’s 22-year-old son Dylan. In a burnt sienna leather coat, white button-down shirt, flared low-slung blue jeans, and retro sneakers, he was hands down one of the most stylish dressers of the night, something like Josh Harnett in The Virgin Suicides only taller (he is 6’ 5”!).

The younger Brosnan is already on the fashion world’s radar: his model good looks earned him a staring role in the Saint Laurent Spring 2015 campaign alongside fellow celeb spawn Jack Kilmer; he also walked the Saint Laurent Menswear Spring 2016 show. Now that he’s making waves on the red carpet, chances are we’ll be seeing more of this second-generation heartthrob in Hollywood, too. 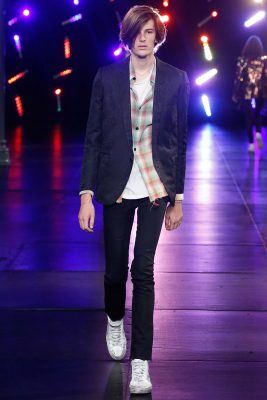