Serena Williams Takes the Bike Short Onto the Court - Kingteeshop Skip to content
No one has done more to modernize the tennis uniform than Serena Williams. As the most fashion-forward star in her sport, Williams sets the standard and makes sure that every outfit is impactful. At yesterday’s Nike Queens of the Future event in New York, she joined fellow champs Maria Sharapova, Sloane Stephens, and Naomi Osaka for a doubles match designed to inspire the next generation of tennis aces.
Naturally, Williams used the occasion to showcase inventive style. Though she was fittingly sporty in her color-blocked windbreaker with a yellow tartan print and a logo Nike T-shirt, Williams finished off her look with a surprising addition: electric blue bike shorts.
Spandex shorts have experienced a runway renaissance thanks to designers such as Virgil Abloh and Marine Serre. In athletic world though, they’re usually the reserve of cyclists. Always outside the box, Williams was an early adopter. First spotted in bike shorts during a charity badminton match against Rafael Nadal last August, she’s made them a part of her on-court wardrobe, even wearing them beneath her famous Abloh designed tutus. Given the trend’s prominence, it’s only a matter of time before she takes the look onto the red carpet. 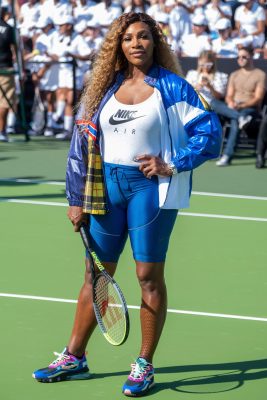