Trying to sum up Alessandro Michele’s influential vision for Gucci is a near-impossible task. Bohemian, maximalist, nostalgic—there’s no single word that can truly capture the designer’s sprawling, era-hopping spirit. What about cinematic? After all, Michele’s world is one populated by characters rather than models; in place of the glossy, tasteful snaps that dominate fashion advertising, his campaigns are more likely to involve gamine youths in prairie dresses beamed up by UFOs, or tracksuit-wearing Northern Soul obsessives breakdancing to disco.

In that case, who better to assume the role of Michele’s chief muse this season than one of the world’s most instinctively stylish actresses: Sienna Miller. “We first met when he was pretty new to Gucci and I was on the jury of the Cannes Film Festival,” recalls Miller, who serves as the main character in the brand’s Cruise 2020 campaign. “He made me a few custom dresses, and they were pretty much the most beautiful things I think I’ve ever worn. It felt like such a breath of fresh air—and then I met him, and he’s just the sweetest, most humble, artistic man.” 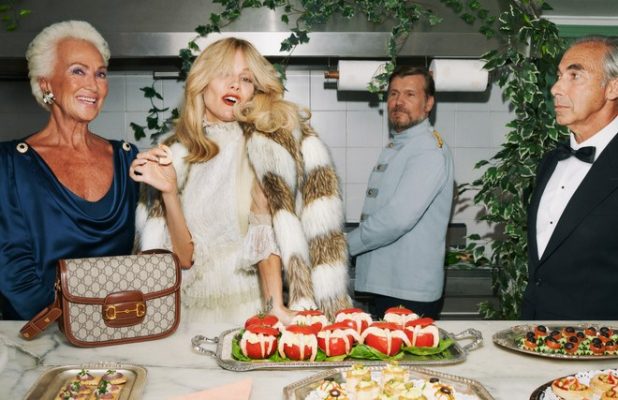 According to Miller, when Michele set about drawing up the plans for the shoot, the choice to cast her as the central figure—an eccentric Hollywood actress throwing a decadent bash in her Italian villa—was a last-minute decision. “She’s inspired by the characters from Dynasty, basically: kind of neurotic, a little bit nuts, a hot mess,” adds Miller, laughing. “I think Alessandro had a few names on a wall, but then he woke up one morning and realized it was me. It all felt like a very intuitive process, and a few days later I was in Rome.”

At the helm of the campaign is none other than filmmaker Harmony Korine, of the controversial, era-defining ’90s indie hits Kids and Gummo. The result is an extravagant, Paolo Sorrentino-inspired Italian society fantasia, where Miller prepares stuffed tomatoes in the cucina, while Iggy Pop and Gucci Mane roll up in limousines to a very decadent (and well-catered, thanks to Miller) bash.

“The entire thing was just a wild experience,” she says. “There was this vast array of different people of ages, shapes and sizes, and it was just raucous. I think I found myself crouched on the floor, laughing hysterically, about ten times. It was that much fun. Alessandro’s world is so egalitarian, and anyone is welcome. He recognizes that there’s beauty in all of us, whether old or young, whatever sexuality we find ourselves to be, however we identify.” 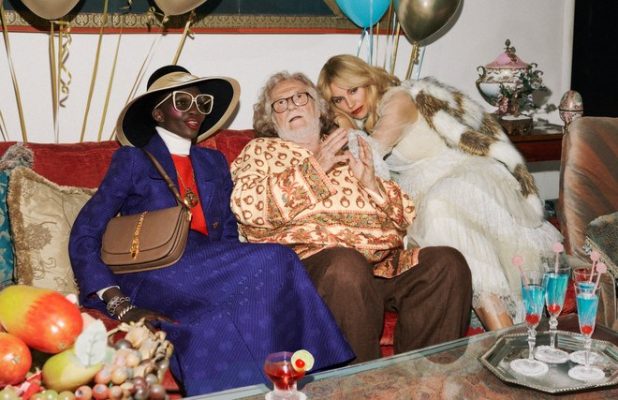 Aside from her acting chops, what makes Miller the ideal candidate for a Gucci co-sign is her distinctive personal style, that popularized bohemian-inflected fashion a decade before it became the ultimate Gucci buzzword. Nobody can forget the late-’00s Glastonbury Festival and Notting Hill paparazzi shots of the actress in flowy, floral dresses; the look that launched a thousand Chloé Paddingtons.

“I’ve always been drawn to fashion that’s nostalgic,” Miller explains. “I used to think that after the ’90s, there wasn’t really an original moment in fashion—everything almost felt like a rehash of what had been done in the past, and that’s probably why I love vintage clothes so much.”

Even if these days, the actress’s style is noticeably less retro—despite the occasional return to previous favorites like floral prints and vintage denim, she largely prefers sleeker silhouettes and tailoring—there’s still an element of playfulness and spontaneity to how Miller gets dressed. “The nostalgia aspect always existed in me, and I think before, I always liked to keep adding. I love things from the past—I still do—but I think it came from a sort of romantic yearning for a moment in time that was different, or even better in some way, than what we find ourselves in today.”

Coincidentally, the political concerns of the present day are embedded in the Cruise collection Miller wears across the campaign shots. The runway show memorably featured a dress embroidered with an anatomical layout of the female reproductive system, and a jacket emblazoned with “May 22 1978”—the date abortion was legalized in Italy. The brand isn’t just paying lip service, either: their Chime for Change gender equality campaign has raised almost one million euros for projects supporting reproductive and maternal health in developing nations.

But even within the collection’s political undertones, Miller notes that the Gucci spirit—whether in the clothes themselves, or the joyous, celebratory tone of the campaign—is one of hopefulness. “There’s a simplicity in the way that Alessandro tackles these ideas—it never feels like he’s saying, oh, we’re going to be political now. Knowing him, and what he genuinely cares about, and the people that he curates to be a part of that world, he really does live by that motto as a human. And so, when he says it, I believe it.”