When he’s not making music, Deaton Chris Anthony spends his days in his Los Angeles bedroom meticulously sewing together patchwork sweatshirts and colorful sweatpants. Judging by the offbeat, DIY charm of his one-of-a-kind Frankenstein garments (including recycled hoodies stitched together from 10 different sweatshirts), you could be forgiven for mistaking Anthony as just another talented streetwear designer. Yet he says his designs are drawn out of the same well of inspiration as his music. Anthony’s debut album, BO Y, a playful collection of sample-heavy songs that bridge the gap between R&B and electronic pop, came out late last year.

His equal devotion to music and clothing is atypical. Aside from someone like Tyler, the Creator, whose Golf Wang collections feel as fully formed as his Grammy-winning albums, it’s unusual for a musician to successfully bridge both worlds. Anthony’s distinct audiovisual work has caught the attention of Louis Vuitton—he scored a race car–themed campaign for the brand last year, recontextualizing some songs from his album—and the skateboarding legend Tony Hawk, of all people. Hawk starred in one of Anthony’s music videos based off of a silly freestyle wherein Anthony riffs on Hawk’s name by turning it into a hyped-up, hip-hop ad-lib.

He’s currently on tour in support of the album, and at his shows (and on his website) you can purchase his latest creation, which is a piece of wearable tech that he’s been developing since 2016 that neatly encapsulates Anthony’s forward-thinking attitude toward music and fashion: Nothing But Net USB Hats. Rendered in mesh and canvas, the baseball caps, which come in 11 different colors, clasp in the back via a USB drive connected to nylon rope (he describes them as the first hats fastened by USB). It’s a handy way for a DJ, or anyone who keeps a fully loaded USB on them for creative purposes, to always have one’s files readily available. “We’re using this hat as a tool to collaborate with other artists and also to be able to push merch within music forward,” Anthony says. “I think something that I’ve noticed since I started making music was realizing that the fashion side of the music industry, or culture and music in general, isn’t really hashed out. There’s way too much potential to really do cool things in fashion and music, because I do think that they are one-to-one.” 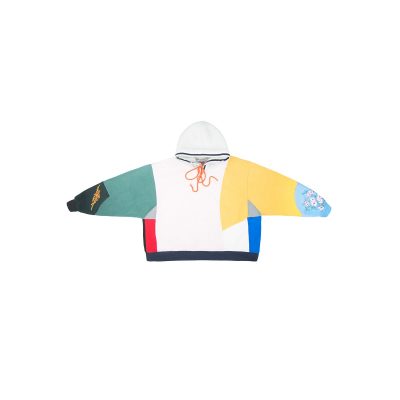 Anthony describes his overlapping artistic pursuits, both in terms of his clothing designs and his music production workflow, as essentially stemming from the same process. “I start all my music by chopping up old ideas from other people—I sample a lot of music—and I begin with that as a base, and I construct a collage of sound. I think that’s why it’s natural for me to chop up old clothes to make something new and fresh,” he explains. It’s no surprise then that his collage-like album feels like an auditory complement to his vibrant designs. “I tried to capture the experience of being in a car with your friends, and someone grabs the AUX cable that’s either going to get someone really hyped or shock the car or make people laugh or make people cry,” he adds. He fully realized this vision in his video for “Racecar,” in which he drives around in a car that he sawed the roof off of (his DIY instincts have no limits) with singer-songwriter Clairo and rap-pop duo Coco and Clair Clair, excitedly bopping to music while wearing pieces that he made himself. 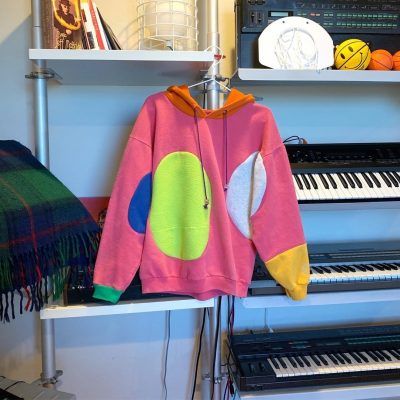 Anthony started sewing together clothes right around the same time that he started making music, in 2016. “I was always looking for color-blocked sweaters, and I couldn’t find any, and I thought, why don’t I take five of these sweaters and just chop them up,” he says. He is always on the lookout for pieces to cut up—he has a collection of hundreds of different sweatshirts and other pieces organized in bins around his room. He’ll take one, hand-paint it, cut it up, and make a wonky pattern, creating a completely new design each time. “I’m just trying to constantly reinvent myself and create an archive of certain styles of sweaters, whether they have circular shapes or they’re super wide and cropped, or there’s pockets in weird places,” Anthony says. “I feel like that’s what reflects the price point.” Some of Anthony’s creations sell for upwards of $800, and most fall within the $500 range. “I paint the piece on the ground. It’s a one-of-one made from pieces that have been worn for years, and only that person is ever going to have that, and that will never be re-created.”

By flipping pieces inside out, Anthony got a better sense for the nature of sewing, effectively learning how sweaters are stitched together by methodically deconstructing them. He also learned by watching hundreds of hours of sewing tutorials on YouTube. He says the pivotal point for him was when he learned how to work a needle and thread. “When I learned the trick of winding it around your pointer finger and creating a knot and being able to sew a button, that’s when it clicked. That seemed like the hardest thing for me,” he explains. The first sweater he made he did so completely by hand, after which he got a Janome domestic sewing machine for $100, which he still uses to this day. “I’ve made 100 sweaters on it. It wasn’t about the machine to me—it works, and I don’t have to think about it, but now I’ve gotten to this point where it’s time for a change.”

Anthony has perfected the patchwork hoodie, clearly, but his DIY instincts have led him to other ventures. He also designs shoes, which he fashions out of sweatpants, sweatshirts, and repurposed old soles. “I superglued an upper to a sole and made this crazy Frankenstein shoe. I’ve been obsessed with the process of making them,” Anthony says.

He’s mostly onto rugs now, though, which he cheekily calls wugs. He makes them by hand with his friend Angela, and so far he says that his favorite one is an almost photographic rendering of a close-up shot of a Blue Man Group member’s face. Another, a work in progress that’s set on his wall, compiles a cast of cartoonish, brawny characters in a boxing ring. “I think custom rugs are going to be extremely popular, because I think it’s a natural sign of wealth,” says Anthony. “I believe photo-realistic rugs are going to become really popular. Mark my words.”

Anthony seems to have a taste for prognostication. He also offered up some broader predictions about the future of style and music: “I think in 2020 things are going to change a lot. I think 2020 is all about being classy and being crispy. I think people who are reverting to workwear are going to move to something that’s a little bit more tailored. I think you’re going to hear that in music too. It’s going to feel simpler and cleaner. That’s my forecast.”