This New York Fashion Week, there were the models walking with their long limbs and slivered cheekbones. There were the reality television stars swirling and twirling at the end of the runways. (Hello, Real Housewives!) And then there were the writers. Yes, purveyors of poetry and prose were the unexpected standouts of the spring 2020 collections. On Saturday, author and writer (and Vogue contributor) Karley “Slutever” Sciortino walked the Kate Spade New York show in a white skirt set with an orange bag. It was a saucy decision for what we think of as an uptown-minded brand to include a writer who bares her soul sometimes in the form of sex diaries. But, in fact, the label and Sciortino share similar philosophies. “Our brand and Karley have a lot in common. We’re both frank, and don’t take ourselves too seriously,” said creative director Nicola Glass in an article about Sciortino’s cameo. “We try to find the interesting things in the everyday, and we always like to do something a little unexpected.” And Sciortino was not the only wordsmith on the runway: Writer and art curator Kimberly Drew also stepped out in purple floral print dress, holding a potted plant. 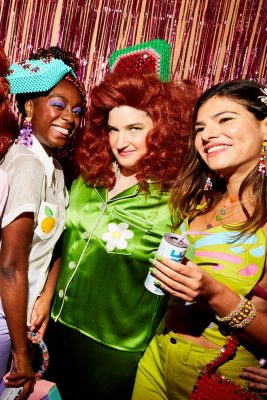 A few hours later at bag designer Susan Alexandra’s presentation, Naomi Fry made an appearance. For the uninitiated, The New Yorker writer and Vogue contributor has a cult presence on Twitter. Her tweets include dry back-and-forths with the likes of Diplo and quips like “SoHo is another country.” (She has a point!) Fry modeled at the Bat Mitzvah-themed bag party at the Public Hotel dressed up in a lime green silk skirt set, holding one of Alexandra’s grammable beaded bags and sporting a bronzy ’60s coif. The casting choice came from Alexandra herself, who reached out to Fry via DM. “I have been a huge fan of Naomi forever. I have a deep pop culture obsession which she seems to share and though we hadn’t met until I DM’d her to model, I felt a connection,” says Alexandra via email. “From her friendships with John Mayer and Spencer Pratt to our shared interest in the exploits of Emily Ratajkowski’s husband, I find her brilliant and fascinating.” 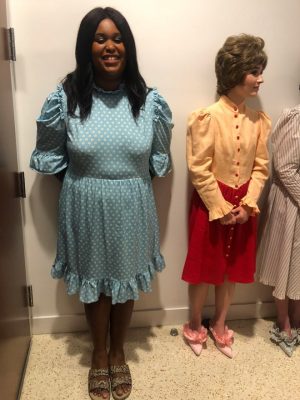 Batsheva Hay’s spring 2020 presentation took place in an auditorium at New York Law School and featured some real professors as models. Dressed in her signature high-collared garb, the academics narrated the show in their own words. The introduction came from writer and podcaster Aminatou Sow who noted that Batsheva’s clothes made her “feel like a pioneer woman who can’t be fucked with.” As for the model casting, the lineup included writer and feminist theorist Audrey Wollen, who wore an orange tiger-print dress with a wig reminiscent of Jane Fonda’s mug shot from 1970. One of Wollen’s recent Instagram posts is her in a baby-pink, cropped T-shirt that reads “Lacanian Bitch” in rhinestones. Yes, that is a sassy, Y2K-stylized reference to French psychoanalyst and psychiatrist Jacques Lacan. 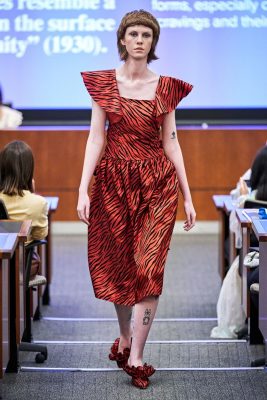 This is certainly not the first time that writers have left the LED hypnosis of their computers and tossed aside their ballpoint pens to float down to a runway. Under the zombie-walk training of sensei-casting agent Walter Pearce, journalist Matthew Schneier freakishly trampled down the Vaquera runway for fall 2019. In spring 2017, author Natasha Stagg of Surveys (2016) and the soon-to-be-released collection of essays Sleeveless (2019) walked Maryam Nasir Zadeh. And while author Chimamanda Ngozi Adichie didn’t appear on the spring 2017 Dior runway, her words “we are all feminists” did show up on a T-shirt.

Maybe these writers don’t have the rabid fanbase of, say, the bronzed ladies of the RHONY franchise, but they do have an impact and their runway moments are proof that designers are taking notice (and reading!). A few years ago, downtown “nodels,” or non-models, with visually strong and often entertaining Instagrams were flooding the runways. Now, designers seem to be delving a bit beyond the influence of imagery on social media and are including the people behind their favorite lit. Maybe this is because people want to be more informed and a pretty Instagram picture will not cut it anymore. Maybe this is because in the crumbling state of the world people need to do their homework, and, yes, stay informed by good ol’ fashioned reading.

Though it might just come down to fandom. For Alexandra and Glass, the casting selection was a result of a feeling of camaraderie between writer and designer. But in Hay’s case, the choice to include someone like Wollen came across as a bit more layered. (Think: feminist theory meets her show theme, the dissection of what it means to cover up.) “I loved the idea of having Audrey walk the show because she is such a physical presence (over six feet tall, bright red hair) but I also love what she has to say,” wrote Hay after the show. “I love the idea of putting her out there as a mute body, while those in the know understand that she really has something to say. The look matched the voice we knew was behind the person. It was important for me because there is so much subtext to my clothing.”