Casey Spooner already ushered in the era of the ultra-sheer shirt during New York Fashion Week last year. If you need a reminder, just take a look at the translucent Raf Simons shopping bag shirt that he wore on the subway, or even that silky camel-colored nude Acne blouse that he wore to the brand’s Fall 2018 runway show in Paris (he later described the look as “camel slut.”)

But now, over a year later, the Fischerspooner frontman is taking his so-called “nude philosophy”—which finds Spooner showing plenty of skin to counteract the body dysmorphia that he’s experienced within the gay male community—to even greater heights at Milan Fashion Week. Spooner made a front-row appearance at the Spring 2020 Prada runway show in an oxblood blazer with a plain black T-shirt underneath, which he then paired with some super short shorts that showed off his toned gams. Spooner’s provocative take on menswear has plenty of legs—in all senses. 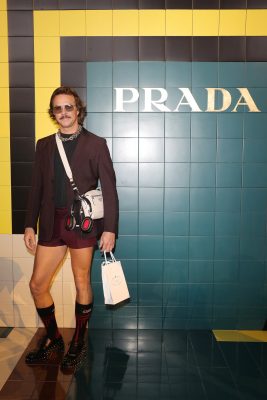