There are people who get dressed, and then there is Kerwin Frost. The host of Kerwin Frost Talks is a bona fide street-style star known for his deliciously outlandish outfits. We’ve seen him wear angel wings at Fashion Week, larger-than-life customized clown shoes, and an astronaut-style plastic orb helmet during the pandemic. These have cemented him as one of the most daring dressers out there. And his wardrobe is only about to get more extreme: Frost just launched the second season of his star-studded talk show, Kerwin Frost Talks, kicking off his first episode with musician Mac DeMarco.

For the new season he’s mixing new grails with vintage. In one look he includes a precious airbrushed shirt from the Rye Playland amusement park and a pair of classic Ugg boots. In another instance he pairs an Adidas track jacket with Craig Green x Moncler pants. Each look is based on feeling. “Sometimes I theme the outfit around my guest, but mostly I just put on what I’m feeling that day,” he says. “With Jeremy Scott’s and ASAP Rocky’s episodes I was referencing their legacy with my outfits. But with someone like Chief Keef, I just did my thing and thought he would like my outfit.”

And while many people’s looks have changed throughout lockdown, Frost’s attire has been just as chic and kooky as in previous years. “I’ve worked from home my entire life, since I was 5 years old, so I can’t really say how it’s changed my look,” he says. One thing that has changed Frost’s style? Fatherhood. He and his wife, Erin Yogasundram, welcomed daughter Waffle last year. It’s been a wild, heartwarming ride. “I think before I had imagined that I would become distracted with trying to establish my daughter’s style, but I think naturally I’ve become more inspired by her to get even crazier,” he says. “We have fun when we dress up; it’s nice. Although it definitely becomes harder to think of yourself when you’re busy being a parent, I think it’s a fun challenge to try and sustain both.”

Here, see some of Frost’s most outrageous looks. 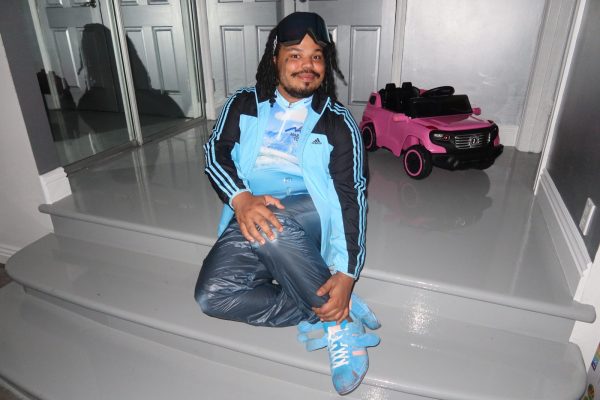