“Thank you to the great people of The Villages,” Trump commented in his 7:39 a.m. retweet of the video. It was later removed.

President Donald Trump on Sunday retweeted a video at The Villages, one of his favorite campaign stops in Florida, in which a man chants ‘white power’ at a protester during an event two weeks ago held at the Central Florida retirement mecca. 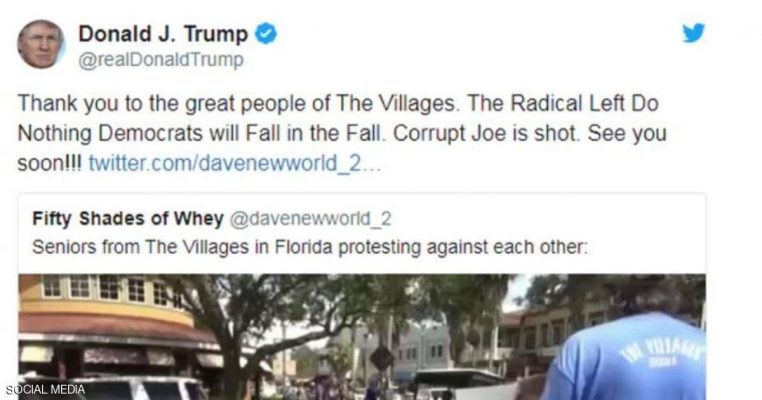 .@JuddPDeere45 on Trump’s deleted retweet of video including ‘white power’ chant: “President Trump is a big fan of The Villages. He did not hear the one statement made on the video. What he did see was tremendous enthusiasm from his many supporters.”

In the retweeted video, a procession of golf carts passes by protesters holding signs. One man is holding a sign that says “Make America Sane Again.”

“Where’s your white robe?” the sign holder asks a man driving by in a cart with ‘Trump 2020′ and ‘America First” signs. After initially flashing a thumbs up sign, the driver then chants “white power” twice, pumping his fist in the air.

“There you go,” the protester can be heard saying on the video. “‘White power.’ Did you hear that?”

Protesters don’t hold back. One woman holding a sign that says “Trump Bigot and Racist” shouts as supporters of the president with “F— Trump.” Later she yells more expletives as she blocks the path of another cart.

It’s unclear why Trump retweeted this particular video, which appears to be taken from The Villages celebration of Flag Day and Trump’s birthday, which fell on the same day, June 14.

“Thank you to the great people of The Villages,” Trump commented in his 7:39 a.m. retweet of the video. “The Radical Left Do Nothing Democrats will Fall in the Fall. Corrupt Joe is shot. See you soon!!!”

The president’s decision to highlight a video featuring a racist slogan comes amid a national reckoning over race following the deaths of George Floyd and other Black Americans. Floyd, a Black Minneapolis man, died after a white police officer pressed his knee into his neck for several minutes.

Protests against police brutality and bias in law enforcement have occurred across the country following Floyd’s death and there has also been a push to remove Confederate monuments, an effort Trump has opposed.

But he does imply with in his comment that he is planning to return to The Villages. Amid last year’s impeachment battle, Trump went there in October for what was ostensibly a signing ceremony but seemed more like a campaign rally. At one point, he coaxed the crowd into a chant of “Eight more years” to troll those who oppose his presidency.

Trump’s White House deputy press secretary, Judd Deere, later told the Associated Press that “President Trump is a big fan of The Villages. He did not hear the one statement made on the video. What he did see was tremendous enthusiasm from his many supporters.”

The Associated Press contributed to this story.