Indya Moore’s performance as Angel in FX’s Pose has made them one of television’s undisputed breakout stars: whether bringing fierce looks to the Harlem ballrooms, or their more intimate romantic moments with Lil Papi, Moore has continued to light up screens throughout the show’s second season this summer. Along the way, the fashion world has also fallen in love with Moore. Angel might be embarking on a modeling career of their own, but Moore’s impeccable style and glowing natural beauty has clearly made them an off-screen fashion star too, whether that’s on the cover of a magazine or in a Louis Vuitton campaign. 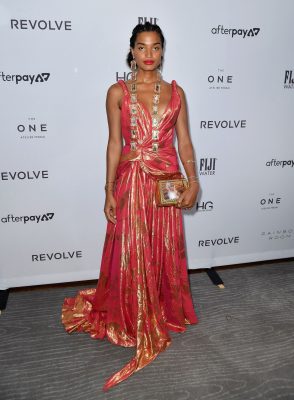 And last night, arriving at the Daily Front Row Fashion Media Awards in New York, the model and actor used their newfound platform to spotlight an urgent political issue—and chose to tell this story through the medium of fashion. Opting for a shimmering pink and gold Oscar de la Renta dress with dramatic draping, they worked with stylist Ian Bradley to find a suitably baroque accessories to match; namely, a pair of drop earrings resembling gilt picture frames. Look closer, however, and you’ll find that these frames were making a powerful statement in support of trans women, and the violence they continue to face in today’s America. 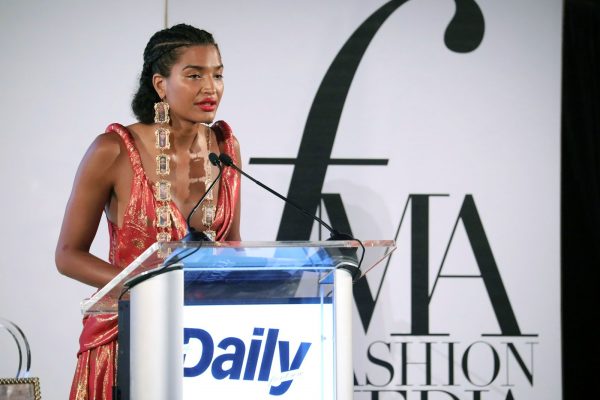 Created in collaboration with jewelry designer Areeayl Yoseefaw of Beads Byaree, the museum-style picture frames were intended as an “altar” to bring awareness to the 17 trans women who have murdered this year in the U.S. alone. Indeed, as Yoseefaw explains, “the issue is so pressing that after creating the earring, and three days before the event, Bailey Reeves, a 17-year-old girl from Baltimore was killed.” While it was too late to add Reeves to the earrings, they together managed to make a clutch bag with a similar frame to honor her too.

As Moore noted in their Instagram caption, the statistics are shocking: while transgender people make up 0.6 percent of the U.S. population, the life expectancy of the average trans woman of color is merely 35 years old. It’s a reminder that the LGBT+ community and its allies must take measures to address this epidemic of violence. “Just like me these women dare to exhaust their freedom to exist by being visible,” Moore wrote below an image they posted of the look to Instagram. “However, instead of being celebrated, they were punished for it. I accept this award in honor of the truth that the best award, and the award we all deserve, is to be able to get home safe.”